A couple weeks ago, I added a little endpoint to the Manygolf server that returned, in plain text, the current number of players:

I hang out in a chat room that has a bot I can query to see the current number of players at any given time. It’s a fun little setup, but I started thinking that it’d be nice to track active players over time. Since I had this endpoint already, the question then became: how do I automatically fetch, store, and display this data?

I asked this question in the XOXO Slack’s #coders room, and expected answers about stats services that are intended for Big Enterprises with Big Data, or maybe an answer describing how to set up a Graphite server, or some other compicated, long answer. So I was surprised when the first response came from Twitter bot wizard Darius Kazemi, who suggested I take a look at using Google Sheets.

My first thought was - Google Sheets? Like, I’d used it for some basic spreadsheets, and even looked into using its API for loading data from spreadsheets at one point, but I’d never thought of it as a scripting platform per se. But, apparently, it really is a full-fledged code hosting service: using Google Apps Script, you can write fairly-vanilla JavaScript that can read and write to spreadsheets (and various other data stored in Google services). There’s even a web-based IDE you use to write, run, and debug your applications! The IDE has autocomplete for special Google APIs! It’s sort of incredible that this entire scripting platform exists and I’d never heard of it, honestly.

Darius pointed me at several resources, and mentioned that you can used timed triggers to run a script on a timed interval with no human interaction (even if the spreadsheet is closed).

With this knowledge, I made a new spreadsheet, accessed the script editor, and, with some trial and error, wrote the following function:

The scripts editor lets you run functions in a one-off manner, so it was fairly easy to test. I then manually created a trigger with the following configuration:

Rows quickly began filling in with the current player count: 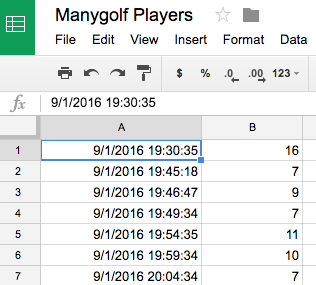 All I had to do finish up was use the standard Google Sheets charting tools to make a line graph of the dataset: 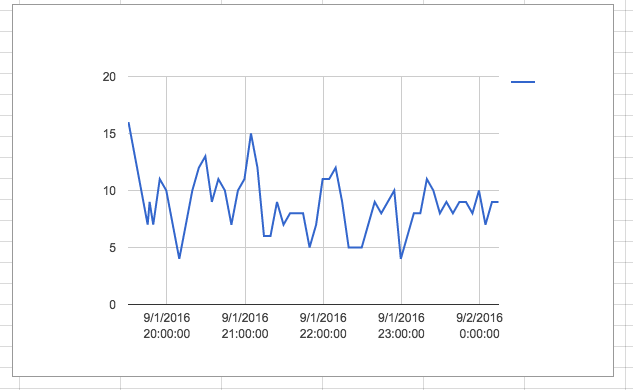 And, ta-da, I had a “live analytics dashboard” that would make any enterprise architect jealous!

I was so happy with how easy this was, and I really want to try using Google App Scripts for future projects. Setting up even the simplest of databases can be sort of a pain (where am I going to host this database? What does this Postgres schema look like?), and this seems like a powerful tool if you want some small-scale persistent data that you don’t need to worry about too much.