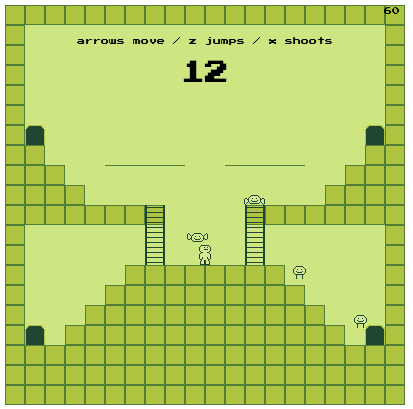 It’s a lot of firsts for me:

While there’s a lot of new things going on, it also borrows mechanics from two of my previous games, Momentum and Monotron. It has Momentum’s ticking timer and clock-extending pickups, while having Monotron’s arena shooter core of endlessly-spawning enemies.

My goal with Blorp is to have more variety than my previous games, and make the gameplay more robust than what I’ve done so far. I’ve been inspired by great single-screen platformers like Bubble Bobble, and hopefully, I can come up with some levels and enemies even a tenth as unique as that.

Of course, I’m currently a long way off: I have one level, two enemy types, and one weapon. However, unlike my previous games, I finally feel confident in generating content instead of just code, including new sprites, sounds, and levels. There should be a lot of neat stuff posted on this blog soon!

Besides just covering new additions and interesting bugs, this blog will also focus on some of the tech stack that I’m using to create games. This includes the excellent Coquette framework, Facebook’s Flow type-checker for JS, and custom extensions I wrote to bridge the two.

Blorp can be played in whatever its current state is at disco.zone/blorp.